Complex digital advertising and marketing for a huge online store.

During the initial audit of the Google Ads account, typical errors were identified: the confusing structure of the advertising account, a lot of intersections in search queries, the absence of some advertisement extensions, and errors in the configuration of the promotion campaigns.

An important point was the analysis of the profitability of the promotion campaigns by regions and adjustment of the rates by various parameters: by region, by device, and by impression time. Our decisions were made based on the statistics we obtained from Google Ads and Google Analytics for the last 12 months.

We also studied the negative keywords in detail: we expanded the number of queries, removed some of the existing queries that cut off the target traffic, and performed “cross-minus” by the groups of advertisements in the campaigns. We redesigned the banners for the dynamic remarketing. We launched promotions.

After launching the updated campaigns, we analyzed the associated conversions and corrected problems in the configuration that had an effect on the decrease in the overall sales volume.

After obtaining the first results, we identified the categories of the leading products and focused just on them. We scaled the most profitable campaigns: we expanded their semantics and increased their budgets.

A month later, we analyzed the promotion campaigns that showed lower results and reallotted the budget in favor of more effective campaigns.

As a result of the comparison of the statistics on our campaigns and on previous ones the following results were obtained.

With the help of split tests of the advertisements, we identified the most conversion elements: calls for action, titles, and texts, and we use them in the context of each group.

We carried out Google Ads experiments with the use of various conversion strategies. The “Maximum conversions” strategy and the classic manual setting of the rate were the best in terms of the acquisition value.

As a result, we reached a stable ROMI level of more than 400%. And the average cost of customer acquisition is 216 UAH.

Comparison of ROAS indices before and after optimization of the promotion campaigns.

Since May 2018, we also started working on customer acquisition from the social networks for the online store.

Initially, for the baby and children’s clothing store the target audience was determined, and the content strategy and the content plans were developed, taking into account the specifics of each of the social networks (Instagram, Facebook). Thanks to the well-developed strategy, a regular posting of the publications was organized using the Later service, which allows us to plan to publish the posts, and the single style was chosen for the Instagram feed.

To make it easier for users to go to the website from Instagram, we enabled the service that allows to make multiple links – linkin.bio. We also started actively using Instagram Stories with built-in links leading to the site that were not previously published in the account.

Regular product drawings were held to increase the involvement in the accounts and audience loyalty. The most popular among the audience were drawings of sets of bedclothes – such competitive posts obtained more than 4,000 comments during the period of 5-6 days, during which the drawing was held.

Opinion leaders whose main blog topic is motherhood were selected for cooperation. We also paid attention to the activity on the bloggers ‘ pages — the involvement coefficient (the ratio of the number of likes to the number of followers of the page) should not be less than 4-5%.

Among them such famous bloggers are as Tanya Prentkovich (289K followers), Nastya Stadnik (305K followers) and Mila Baraeva (158K followers). They made reviews on the products we sent, which resulted in an increase of coverage in the account and in an increase in the number of followers on the page on Instagram. For example, on the day when Nastya Stadnik published the stories about Berni, the activity in the profile increased more than three times. The number of profile views increased to 6,200, while the average daily profile traffic is 1500-2000 thousand persons.

We also started publishing screenshots of reviews and photos made by the customers, which increased the level of confidence in the store.

Later, we added the feature that makes it possible to publish Shoppable posts in the Instagram account. This again increased the conversion rate from Instagram, since the user no longer had to go to the additional linkin.bio page, and he or she went directly to the page of the selected product.

As a result of our work, the number of sales from paid search and social networks continues to grow, and we continue to optimize the performance of the accounts, and the results.

More than one year has passed since the case was written. A lot of things changed, and we decided to make a small update.

During this period, a huge number of tests were made in advertising. Dozens of hypotheses have been put forward. We used all available Google Ads and Facebook Ads tools to scale the results. Let’s study some of them:

Testing of various strategies on the setting of the rates. Recently, Google has done a lot of work to improve the automated strategies, and this brought the visible results. Campaigns with Return On Advertising Spend strategies (ROAS) show the results better than manual strategies. When changing to a new strategy, you should be careful, because there is a risk of losing sales and ROAS. The way out for this situation may be the use of Google Ads experiments. This tool allows you to divide your campaign and allocate a part of your budget to test your hypothesis and see: if, for example, the new strategy on the setting of the rates will work better than the current one. The following strategies were tested for a number of campaigns:

It turned out that different strategies work for different campaigns. Depending on the results obtained as a result of the tests, the strategies were distributed among the campaigns with a selection of the best one in terms of its performance for each of them.

Change from Google Shopping to Smart Shopping. After obtaining and accumulating enough volume of statistics, we started changing some shopping campaigns to Smart (smart shopping campaigns). This type of campaigns differs from the usual ones with several features:

As a result, for the shopping campaigns, it was succeeded to increase ROAS by almost 20%, the number of clicks by 44% and in addition to decrease the expenses by 7.4%. The number of sales and the return increased by 15%.

Segmentation of remarketing audiences. Special attention was paid to this area. After analyzing the statistics, we found out that less than half of the users make a purchase on the first day of visiting the website. More than 15% of users make a purchase within the first week from the moment they first visit the website. Obtaining this data from Google Analytics, we created several remarketing audience segments for different product groups by the number of days since the first visit and by the days for the abandoned shopping cart. For some of them, we found out that users willingly make a purchase in 2 days after adding of the product to the cart (the cost of conversion is 4 times lower than for other segments by days).

We also tested combined audiences by days and the number of pages viewed, which allowed us to identify an active audience with an acceptable cost per each conversion for certain categories of the website. 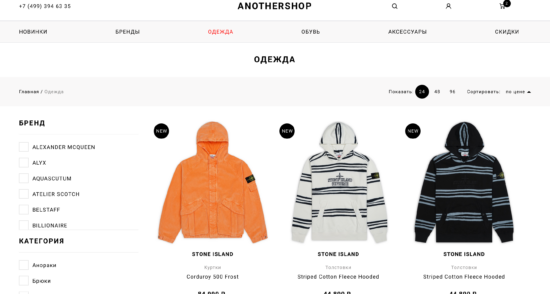 "AnotherShop expresses gratitude to ArticMedia for high-quality cooperation and constant …"

"My Experience is Excellent with Astha technology"

How Rapid Physiocare Maintains Its Online Presence With SEO and PPC