Our goals were to create a visual language that captured the attention of craftsmen from all fields.

Knife & Flag creates quality aprons for craftsmen of any trade. The aprons are custom-designed for high-level crafting, made to last, and a stylish accessory that keeps people talking. While they liked the “gritty” look and feel of their original launch campaign, they felt that it might be turning off some of the less “hardcore” potential customers, and were looking for a social campaign that held to the rationale behind their original branding, while simultaneously making the brand a bit more approachable than the prior work.

Our goals were to create a visual language that captured the attention of craftsmen from all fields and touted the benefits of a custom-designed Knife & Flag apron. Wanting to inject some color into a previously existing black & white only look and feel, we chose to utilize desaturated images in both concepts and then presented 2 potential campaigns for them to utilize going forward.

For the branded social media campaign, we created two unique concepts, one featuring bright, vibrant colors layered over consistently desaturated images, with the other featuring large, white copy over a graduated level of saturation.

The first concept, “Artfully Crafted,” refers not only to the time, attention and detail that Knife & Flag put into their aprons, but that same time and attention to detail that those who use Knife & Flag aprons put into their creations. Whether they are bakers, barbers metalworkers, mechanics, or purveyor of any other craft,  at their heart each is an artist, creating works of beauty to be both beheld and utilized.

The second concept, “Made To,” refers not only to the fact that those using Knife & Flag aprons were born to do just that, and are exactly where they are meant to be, creating high-end products with only the best tools. Likewise, Knife & Flag aprons were created solely to be functionally the best aprons that could be used by all of these tradesmen while in pursuit of their own perfection. 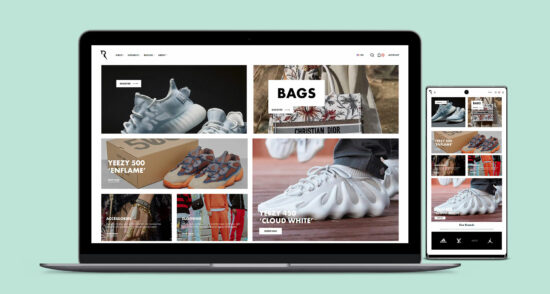