Link to the external article.

If you have ever wondered how to implement DevOps in your scale-up and don’t know where to start, this article will help. You will explore the difference between traditional development and DevOps, learn how to prepare for it, and investigate the first steps. So, let’s get started.

In short, DevOps is all about breaking down the barriers between people, technology, and delivery processes, and making these three work together effectively.

So you decided to adopt DevOps at your organization. To pull this off, you’d need to have all three critical elements (people, technology, and processes) prepared for the transformation changes to come.

But how do you know you’ve reached a turning point where you can delay no longer?

When Is the Right Time?

According to Atlassian, in 2020, there were almost twice as many companies enjoying the benefits of DevOps implementation in the last three years than those that have done so in the previous five years. Considering such a quick-paced increase in the DevOps adoption, the question “when” is clearly out of the debate. The time is now! 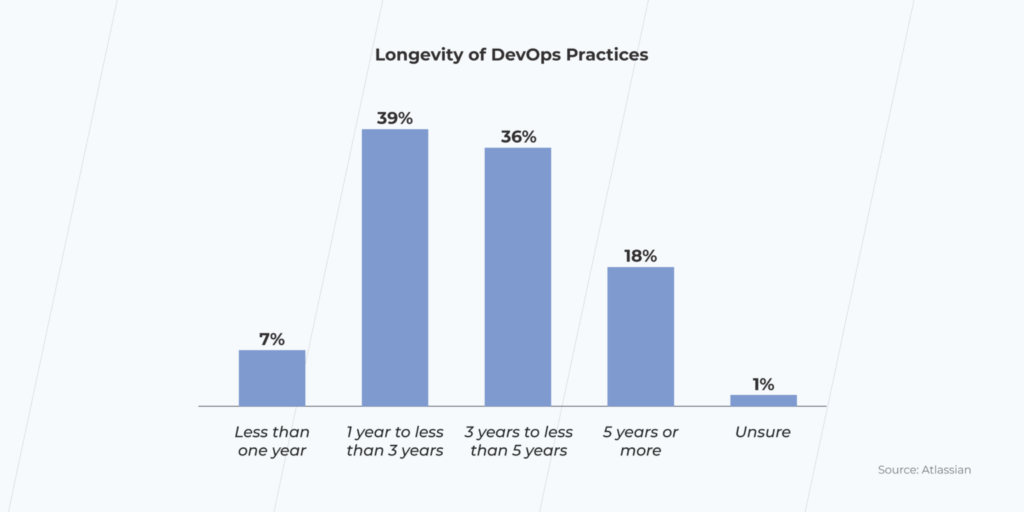 How well does DevOps do when compared to the old way of doing things? As a matter of fact, pretty well. Atlassian says: 99% of respondents marked a positive impact on their organizations.

DevOps is rising in popularity and hasn’t even reached its prime yet. In light of this, the traditional software development life-cycle (SDLC) might seem a little bit retro. Now let us explain why. 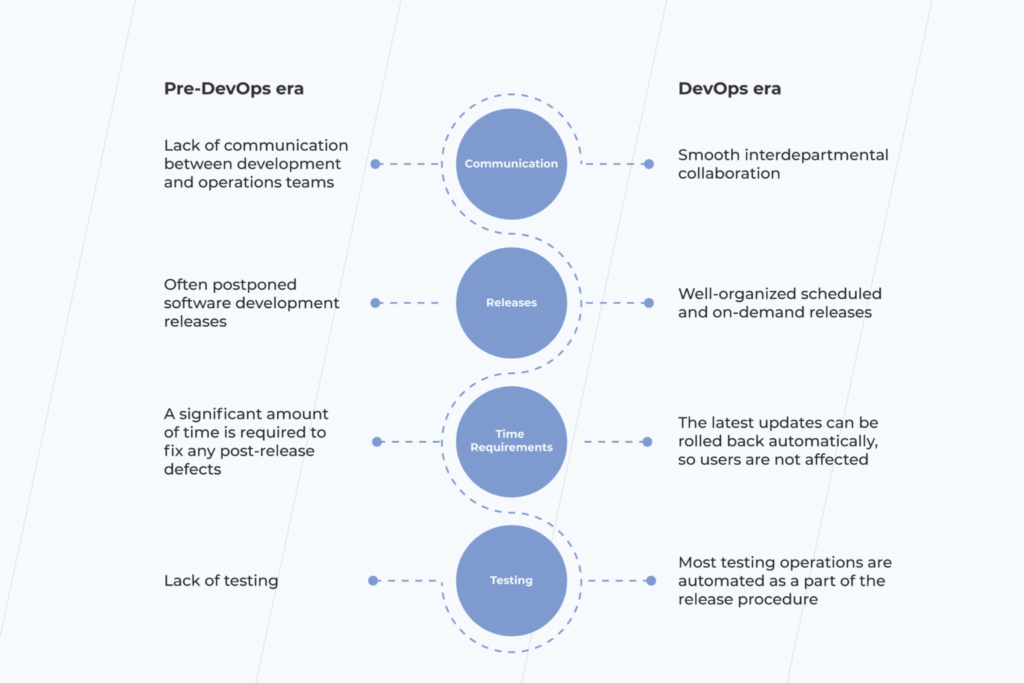 In the pre-DevOps era, you typically had separate departments responsible for developing, testing, and delivery. As a result, the successful project delivery heavily relied on effective interdepartmental collaboration. That could be particularly difficult to achieve if you outsourced some of your operations to third-party vendors.

You used to have a single staging environment where all pre-release preparations took place. After deployment to production, merge conflicts were far more likely to appear, resulting in irregular and long release cycles with a high probability of post-production defects.

Here is a case that happened during the pre-DevOps times. In 2011, Facebook released the Timeline feature. Back then, the gradual release was not an option on the table, so the feature became available to all users at once. The result was that 500 million users tried a new functionality, causing a significant server breakdown. Had Facebook made their release steadily, they would have more time to gather feedback and predict a possible peak load.

In DevOps, all departments are responsible for the release procedure. It leads to an open collaboration culture, close interdepartmental ties, and better team spirit instead of an individual mindset. Dealing with third-party vendors can still be quite challenging; however, a relaxed environment tends to work more effectively than strict release guidelines and rules.

A set of DevOps practices, known as continuous integration, deployment, and delivery, ensures that you have a ready-to-go deployment build. All software changes are automatically merged, tested, and deployed to a production environment with fewer efforts required to coordinate various departments.

The Agile mindset is the cornerstone of DevOps practitioners. Scrum methodology allows more frequent product releases, including unplanned ones. All changes are versioned and can be implemented as you go.

A great example of a company that recently became a DevOps adept is Adobe. Back in 2016, they made a shift from on-premise software to a SaaS subscription model, dealing with issues they had never experienced before. To overcome such challenges, they started using a ​​CloudMunch platform, which allowed them to increase the frequency of their releases. The result is astonishing: the app development demand is covered 60% more!

When you decide to incorporate DevOps in your business processes, the first step is to develop a roadmap of this procedure. You start with defining very high-quality actionable items, such as: 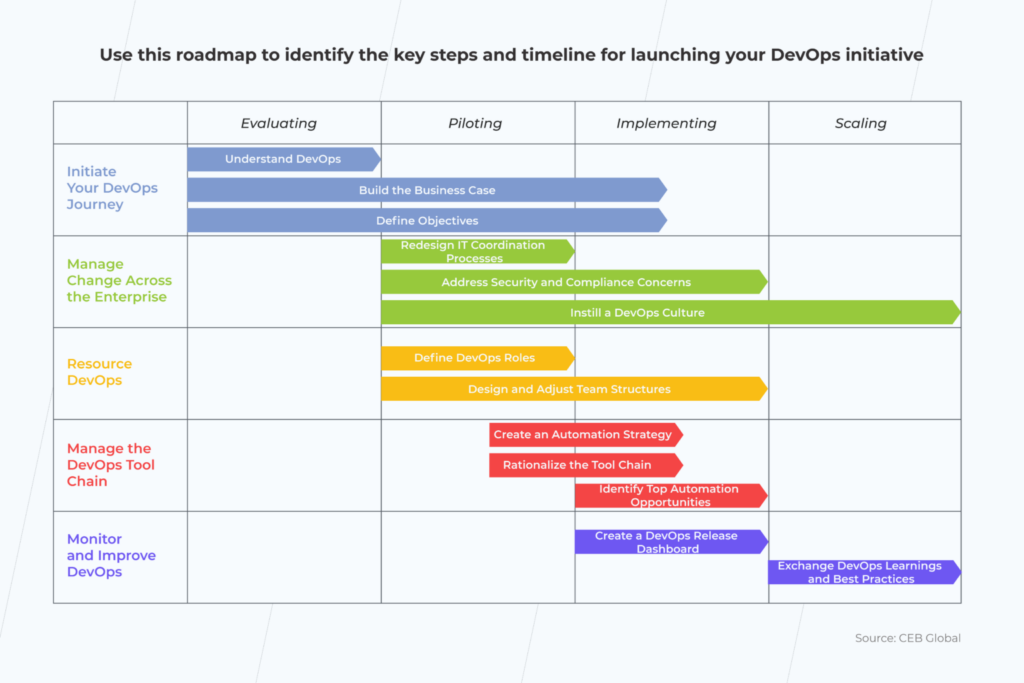 The DevOps roadmap can be used as a reference point for stakeholders. It will also help you better judge how effective collaboration between the engineering and operations department is and whether the internal processes show clear indications of improvement.

Embracing DevOps Culture: What Do You Need to Get Prepared for the First DevOps Implementation Steps?

Once you have developed a DevOps roadmap, assure your team is ready to implement the new approach.

The ultimate goal of any DevOps transformation is to change the established attitude and connect people. There are several ways you can go about doing this:

Now that you have established a DevOps implementation plan with clear values, it’s time to put them to good use. The DevOps pillars, outlined by the “The Phoenix Project” DevOps adoption book, suggest incorporating critical acceptance and continuous learning/improving as a part of your cultural DevOps transformation values.

DevOps is gaining momentum, and it’s not too late to jump on that train.

Embracing DevOps means so much more than just changing a particular delivery pipeline. It’s the mindset that matters most. So we suggest starting your journey with DevOps implementation steps as essential yet straightforward cultural changes and a clear DevOps roadmap.

All in all, that might be too much to process all at once. Get in touch with us if you need some help with getting your head around it. Together, we’ll design the DevOps implementation strategy that will meet your needs. 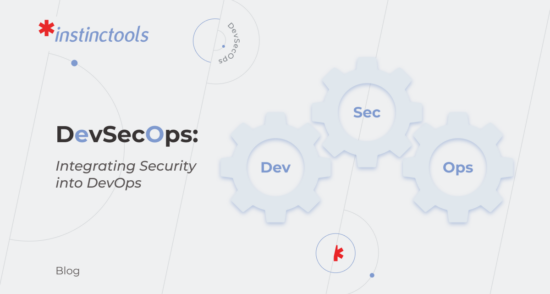 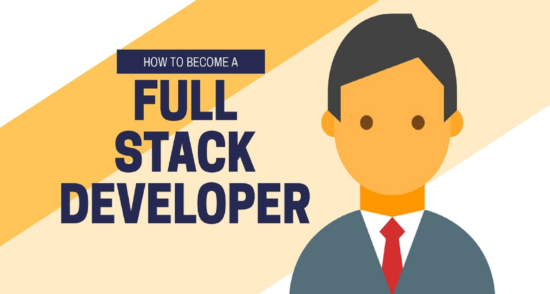 How to Become a Full Stack Developer: 6 Steps