A luxury turned necessity, mobile apps are now proliferating exponentially. However, it turns out to be explicitly challenging for the developers. In the world where multiple operating systems thrive and each having their own episode of users, apps built must abide by the necessity of all. Their legacy, integration and business process vary dramatically and an organization envisaging mobile app development must cater to all platforms. Summing up the entire scenario it would not be wrong to state that cross-platform app development is the need of the tech world today.

If you are still contemplating to choose between native iOS/Android or a hybrid app development, consider the fact that a report by IDC suggests 38% rise in the availability of tools for a cross-platform framework. This refines your view and I hope now you know that restricting your app to a single platform would eventually lead to a decline in your generated revenue. Where a platform oriented app might appear costly, a hybrid app would enable all developers to reach to a larger audience.

The digi world today is run by smartphones. Users of smartphones have taken an extensive leap with Android usage accounting to 88% and iOS witnesses a 12% usage. A write once run everywhere protocol is seen to overpower the native app developers. With the digital revolution, the cross-platform app has opened doors for mobility. Developers that choose to develop a mobile app can effectively use scripting languages for hybrid app development. This, in turn, boosts productivity and lead to Defragmentation of the app development industry.

Few of the most common advantages of cross-platform app development tools are:

A single code base that can work on multiple platforms, Cross-Platform App Development is predominantly economical. Owing to a pool of entrants in the tech world every now and then, a single app compatible on different platforms saves both time and money. Additionally, you need not hire a professional for app development on different frameworks. A single professional that excels in app development takes the initiative.

One of the most proliferating ideas is keeping the uniqueness alive. While developing native apps for a similar domain, the look and feel of the app might be different. Using cross-platform app development tools reduce the possibility to a considerable extent.

Cross-platform apps as the name say it is all about reusing similar codes. Keeping the base same and inducing desirable modifications provide flex features to your app and help you stand out.

True that the cost of cross-platform app development is seen to talk moon, it is desirable that a tool is used so that a greater attraction level is increased.

Concern Before Choosing A Tool

Before you set out to opt for a particular tool and start manifesting ideas to curate an app, you should have an idea about several features of a tool and how should you rank the tools to work best for you. The market today has a slew of apps and opting out for one would be difficult. Choosing the best tool is eventually desirable to attract audience base.

In a market which plethora of tools prevails with all promising a flawless and explicit mobile app, it is not easy to seek a tool that reflects all needed for the cross-platform framework. Do not hesitate or take vague decision while choosing a tool, here we list a few of the factors that you should take into consideration before picking up a tool.

One of the most important factors that determine the choice of a tool is speed. Today the business world thrives on competition and it is the responsibility of a company to deliver a project in the minimum possible time without compromising on the quality and spec features. So, when you explore the web to find an optimal cross-platform app development tool, find one that ensures optimal development along with quick delivery.

A bonus while choosing a tool is its provision of community support. Several tools such as the Appcelerator have a community of support elements which in turns helps the developers to build an app.

This is the let influencer while opting for a tool. Cross-platform app development signifies to have the same foundation base that can explicitly function on multiple platforms and so the tool used must be compatible with the optimal platforms with multiple integrations.

Native apps have ruled the world for a long time and the features they own has helped them attract a pool of audience and additionally gain trust. So, while you are on the road of choosing one particular tool, invest in one that has added support for the native functionality. Apache Cordova is one such tool that has access to native APIs.

An enticing plethora of developers, cross-platform apps are ever growing and this induces the challenge of picking up the aptest one. We draft down some of the most effective and notch quality tools mapping with the requirements of developers.

Ranking first among the list of tools used for the development of cross-platform apps, Apache Cordova is available without requiring you to pay a penny. Earlier, this tool relied on phone gap but now Adobe has released it’s a standalone version. Dicing native APIs on to the Cordoba set, Apache Cordova is open source and is induced by most of the app development tools to club a codebase into an executable native API.

A name that frequently pops out while surfing for the most effective cross-platform app development tools. A single C# shared codebase allows developers to build apps having compatibility with Android, native iOS, or the windows. The tool is backed by Microsoft and has expanded in terms of analytics, testing, front-end development along with back-end services. Xamarin is the first choice for all the C# coders and around more than 15000 firms hold compliance with Xamarin.

A tool that turns the development of cross-platform apps successful and once formed the basis of Cordova, PhoneGap is now a sperate entity. This Adobe backed tool has a GUI system that provides an abstraction for the Cordova’s messy command lines. This tool beholds an application server that enables developers to host apps by running them in their own desktop. This server is highly effective in looping the price of build — run — revise and this reduces the total time of developing apps. Developers can now use their coding instead.

An Ionic framework is yet another excellent tool that enhances hybrid app development. A fusion of Angular backed with a UI library of its own. Developers find this framework synonymous with cross-platform apps and hence deem it as one that provides ambient experience for the same. Since the framework is PhoneGap reliant, it extends few of its plugins and additional features.

Another Apache backed mobile app development tool, Apache Weex is the fusion of Cordova and JavaScript interpreter. Decoding HTML followed by rendering of view elements of Native dynamically. Own community support of a plethora of developers to update plugins regularly.

Framework 7 is another Apache Cordova backed free to for development of cross platforms app. This consists of a Vue.js framework along with a pool of interface elements reflecting features similar to native interfaces. The tool enables recreation of designs of standard iOS along with design patterns of Google material that duplicates the look and feel of native apps. Also, it has scope for customization of theme backed interfaces.

The last in our list, react native largely relies on itself for development. For the developers who have had hands-on developing web apps based on React won’t find it hard to develop mobile apps to React Native. Also, react native takes a clean stride above other JavaScript to native app frameworks. One of the most popular and trusted frameworks, react native forms the basis of both Instagram and Facebook

With the emerging competition in the world of mobile app development, finding a cross-platform app developer is predominantly a challenging task. AppTrait Solutions is one such company that aims to provide the optimal app development solution. We have a team of software geek who traces the minutest requirement of clients for the development of an excellent hybrid app. 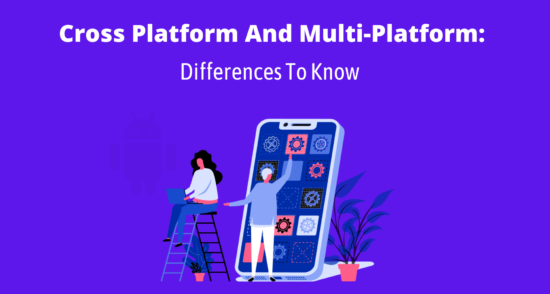