Mobile apps continue to expand functionality with 5G, mobile wallets, wearable technologies, and AI, being some of the most popular features in 2022.

The mobile app development industry is easily one of the fastest-growing ones today. It has been able to stand the test of time, and various movements have been made with modern technology, and its success is pretty much ensured. The only question is how far its growth will go in the future, which is certainly bright.

Today, being successful in the field of digital media cannot be achieved without knowing how to use your smartphone efficiently. That little computer we have in our hands is the most powerful tool we can use to achieve whatever we want. There are countless success stories.

At the same time, we can see that the biggest threat to a successful story of this sort is that the highest percentage of mobile apps simply fail to attract attention. When you take a look at their numbers, you will not be surprised. Today, we want to talk about the trends in this industry that will mark 2022.

Without further ado, let’s dive deeper into this topic.

Probably the hottest subject when it comes to mobile app development is certainly 5G technology. The appearance of this technology is something that will change the industry to the core. Even though it is not in full use today, we can see that many companies have started adapting to the new circumstances 5G will produce.

The reason is that this technology makes it possible for mobile apps to be significantly faster. Therefore, we can expect them to become significantly more efficient. One of the reasons for that is that they will have much more capacity that can be put to good use. One simple fact can clear things up pretty well.

5G is a hundred times faster than the previous version, which was regarded as the fastest one out there at the time of its introduction to the public. So, you can see just how advanced the industry will become in a relatively short period. For all these reasons, we can conclude by saying that 5G will be the main drive-force of the industry in the future.

We are talking about WatchOS 8 update. It consists of various updates and features that have never been seen before. More specifically, this update will open a lot of doors to users who own Apple watches, and other products that come from the company’s rich offer. But that doesn’t mean Apple is the only player working on these.

At the same time, we can see that Google has made some significant steps toward exploring these possibilities in the future. Both of these decisions have made it possible for developers to start thinking about making a slight shift in their careers and be a part of something that will determine the future of the industry.

Using our voice for controlling technology is not a new idea. We can see the start of this idea in Hollywood movies from the eighties. In the 21st century, this has become reality. The technology we are talking about is known as a voice user interface or VUI. Naturally, it is mostly used on smartphones.

In a recently published research, we found a statistic that says that more than 80% of smartphone users use voice commands frequently. On the other side, more than 90% of respondents said that they are interested in using this technology on other devices. Without any doubt, this one will play a major role in future mobile app development.

One of the fastest-growing trends in the mobile app development industry is utilizing mobile wallets. People do not need to carry their wallets with them whenever they go. Instead, they can make all the payments through their smartphones. We can all agree this is a big game-changer for the industry.

One thing that was announced is that this possibility will be expanded and that we can expect peer-to-peer transfers to become a possibility shortly. Not only that paying this way is much easier, but it also makes it easier for the user to track all the transactions that have been made in a certain period.

Another interesting thing to mention about this is that these mobile wallets will have the possibility to make transactions through different payment methods. While this possibility was announced, we shall wait for at least a couple of years become this idea comes to fruition.

Lastly, we want to talk about something already present, but it will have a much bigger role both in 2022 and in the future. We are talking about machine learning and artificial intelligence. We say that it is present even today because most of the most popular mobile apps have included AI as a significant element.

The same can be said about app development. As a result of that, we can expect that development will become more accessible and much faster in the future. One of the segments where we will see the most progress is certainly customer service. All the questions and problems will be taken care of in a swift manner.

Mobile development is a big thing these days, and we do not have any doubt it will remain to be so in the future. Here, we’ve discussed the most significant trends to watch out for in 2022. All of these have a bright future and we are excited to see all the benefits they will provide us with. 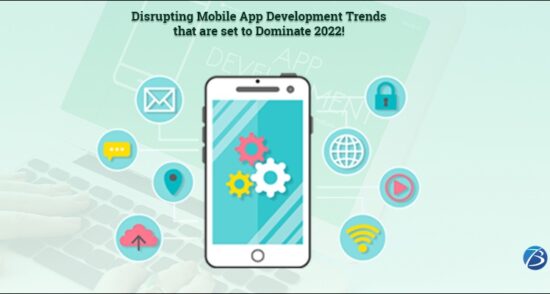 Disrupting Mobile App Development Trends That Are Set To Dominate 2022!