React Native is one of the most preferred frameworks for cross-platform app development and has been adopted by several industry giants including Facebook, Instagram, Skype Microsoft, Tesla, Shopify, Walmart, and UberEats. This framework was created by the Facebook team to address the limitations of React.js.

The Facebook-developed SDK React was a viable option for building web apps. However, when Facebook adopted a mobile-first strategy, web apps needed to be rendered to the mobile platform. This task was indeed challenging! At first, the Facebook engineers employed HTML5 to render apps on the mobile web, but this strategy failed. Thereafter, they embedded the WebView within a mobile-native container. This approach too wasn’t workable due to the absence of necessary attributes like gestures & touch events, a keyboard API, and image management capacities.

Then, they realized the need to build native apps for delivering an impeccable UX. But, the idea to build Native apps for Android and iOS separately involved roadblocks – an imperative coding process, separate codebases for different platforms, and a slow iteration process as each app’s prototype needed Playstore’s prior approval.

Finally, Facebook conducted an internal hackathon, and React Native, an improved version of React, was coined. The React Native framework was launched in 2015 as the one-stop solution for mobile app development and made open-source in the same year. Let’s explore more about the framework and its functioning!

React Native is a JavaScript-based mobile app development framework that is used for crafting natively-rendered mobile applications for the Android and iOS operating systems. The unique selling point of React Native lies in the fact that developers can build apps for both platforms simultaneously using a single codebase. The framework uses platform-specific modules and APIs by compiling the JS code to native components. So, React Native developers can use native components like Text, View, and Images as building blocks for creating new components.

How does React Native differ from React?

React Native is based on React for the web, the Facebook-developed JS library used for developing UIs. But, while React targets the browser, React Native targets mobile app platforms. As such, mobile app developers enjoy the convenience of using a known JavaScript library for creating mobile apps with a native-like look and feel.

React Native uses Text primitive in place of span primitive used for the web. This Text results in a native TextView for Android apps and a native iOS UIView for iOS apps. For this reason, despite using JavaScript for app development, the end application is not a web app embedded within the shell of a mobile app, rather it is a mobile app that is real native.

React Native apps are created using JSX, a combination of JavaScript and XML-esque markup, just like React apps. The difference is that React Native uses a “bridge” under the hood for invoking native-rendering APIs. Here, Objective-C/Swift APIs are used for rendering UI components on iOS apps while Java/Kotlin APIs are used in the case of Android apps. Simply put, the bridge translates JS code into platform-specific components. As a result, the app renders real mobile UI components instead of web views; imparting the look and feel of a mobile app. Moreover, React Native exposes the JS interfaces for the platform APIs; this enables apps to access smartphone device features like a user’s current location, camera, etc.

How do React Native Apps function?

A React Native app is segregated into three different parts –native code, JavaScript code, and the bridge. The bridge interprets JS code for executing it in native platforms and enables asynchronous communication between Native elements and the JS code.

Significant threads involved in the functioning of a React Native application

Main (Native) thread: The main thread, also called the Native thread, is used for UI rendering in iOS and Android applications. It manages the task of displaying UI elements and processes users’ gestures.

JavaScript thread: The JS thread basically deals with the app’s business logic and defines the structure as well as the UI functions. The functions of the JS thread include executing the JS code within a separate JS engine, making API calls, processing touch events, etc.

Shadow thread (Shadow Tree): This thread generates shadow nodes and acts as a mathematical engine that uses algorithms to transform layout updates into accurate data and UI events into the correctly serialized payload.

Customs Native Module thread: Such threads are used for accelerating an app’s performance when custom modules are used. For instance, React Native handles animations using a separate native thread so that this task is offloaded from the JS thread.

Out of the aforesaid threads, the most important threads that help a React Native app to function are the Native thread and the JS thread. Interestingly, there is no direct communication between these two threads and so, they do not block each other.

Check out how a React Native app works!

When an app launches, the Native thread loads the app and spawns the JavaScript thread for executing the JS code. The Native thread hears UI events such as touch, press, etc., and passes on these events to the JS thread through the React Native bridge.

The Main thread collects UI events and sends them to the shadow thread. Events are converted into serialized payloads and sent to the JS thread.

The JavaScript thread now processes the payloads and then updates the UI or calls native methods.

How does the React Native Bridge ensure smooth interaction amongst the threads?

The React Native Bridge allows asynchronous communication between the threads so that one thread doesn’t block the other. Moreover, the messages are batched – messages are transferred between threads in an optimized way. Furthermore, the bridge serializes messages so that two threads cannot share the same data or operate using the same data.

How to set up the React Native App development environment?

Here’s how to set up the environment to create a React Native app with the help of Expo.

The app can be previewed by either running it on an Android emulator or by installing the Expo app on your mobile phone and running the app on the device by scanning the QR code. Thereafter, you need to install a text editor like Atom, Sublime, Visual Studio Code, etc. Now you’ve got all the necessary tools to create a React Native app.

React Native is a profitable option to pick if you need to build a mobile app that targets Android as well as the iOS operating systems. Cross-platform development with React Native speeds up your development and reduces development costs. Hence, this framework is best for entrepreneurs who intend to build a quick app prototype for validating the app idea. 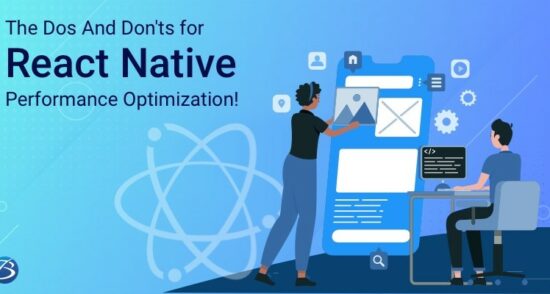 Want To Optimize React Native Performance? The Dos And Don’ts