With over 2 million + users, Google is all set to offer the most widely used Open-source UI software development toolkit, Flutter. Using Google’s Flutter toolkit, one can design natively, beautifully, and compiled applications for web, desktop, mobile, and embedded devices using a single codebase.

Whether you shopped on Alibaba, made payment with Google Pay, or ran an ad campaign on Google Ads, flutter is for everything. In March 2021, second-generation Flutter was released with more upgrades and enhancements with offering excellent developers’ experience. Let’s look under the hood to discover Flutter’s advantages and how Flutter 2 is better than Flutter 1.

What Is Flutter, and What Is It Used For?

Flutter is Google’s portable UI toolkit used for compiled applications and gives life to them. For all developers out there, Flutter helps them to speed up app development. It reduces the complexity and cost of app production across platforms. Moreover, for designers, it helps to offer a canvas that builds for high-end user experiences. Flutter is designed to provide top design ideas of the decade. It turns the concept into production code without even compromises and imposed with the typical framework. It allows the unification of app developers into a single mobile, desktop, and web app with building multiple platforms out of a single codebase.

Flutter 2 app development company uses flutter 2 based on optimized app performance. Recently, choose Flutter 2 benefits to come over Flutter 1 with accepting all challenges with better shed light. Flutter 2 now part of the stable channel and desktop support, enabling the release of candidate-like forms with an early release beta snapshot in the stable channel.

With Google’s recent Flutter mobile app development, large companies work on Flutter apps to replace the existing app with ones that perform better. It helps developers to be productive and help in improving cross-platform SDK with developing great application.

How Is Flutter 2 Better Than Flutter 1?

There are few challenges observed with Flutter 1 where it hinges on reliability, appearance, performance, and usability. Hire Flutter developers to achieve multiple goals under one umbrella by using the Dart programming language. But Flutter 1 does have several issues encountered below

If you’re looking for libraries that cover unusual cases for working with Bluetooth, we might encounter challenges. If one narrows the search, then finding the most stable library comes with optimized flutter app performance. But with using -BLE-in pub. dev, one might not get the best results. One needs to have solutions like Copy-paste flutter_blue in Gitlab rather than GitHub. With this, developers choose the wrong library, but we have a solution for that Flutter 2 to resolve the complex problem with ease.

Some developers work with localization as a challenge in Flutter. It’s possible to determine the locale of any device without any complexity. The process of handling the resource is non-existent. In such cases, developers often bet on a common solution known to the community-JSON files. It identifies constant as JSON fields in a simple structure which not protect from exceptions during runtime. One may find it inconvenient due to special files that project to different IDE with distinct configs. Hence, we need to choose Flutter 2 to resolve the localization challenge.

Difference Between Flutter 1 and Flutter 2

It offers web support in the beta version. It requires developers to build different codes for different browsers and platforms.

It uses similar experience on both web and mobile. It owns to the portability of Dart where Flutter framework power web platform and use same code to develop apps for both iOS and Android.

It does not have a context menu, which led the developer to wait for long and manage touch input.

It comes with a built-in context menu that offers foundational features like pivot points and text selection. Flutter is the best mobile app development framework to allows developers to use a high-precision pointing device.

It’s not easy to load ads in Flutter 1 using the previous version.

One can use the Flutter 2 plugin, where a developer can launch the application using new formats.

It does not support desktop Support.

It provides a beta version for desktop and support developers to access it by switching to the beta channel.

Do not have such widgets.

It launched with two new widgets like Autocomplete and ScaffoldMessenger.

If you’re looking for a library on iOS in Flutter 1, then it’s tough. Hence, the developer needs to go through some processes to search for one.

Take the cue from the feedback submitted by developers where Flutter 2 can easily use iOS search bar UI.

Related: Google Announces Flutter 2.0 For The Web And Desktop Apps

Flutter 2 comes with Dart language that is a well-optimized programming language for Android, iOS, Windows, and macOS. Initially, it was developed with web compatibility and flexibility. Now, Flutter developers can create native compiled apps popularized and led to mass dissemination of programming language. With Flutter 2,  iOS app development and Android app development to identify the gap and provide a new version.

Flutter has a vast community that keeps on using the framework and testing it. All in all, Flutter comes with using the high potential for a developer to use future app development approaches. If you’re looking for a web version for your Flutter app, then we are the best Flutter app development company to create an excellent mobile app. 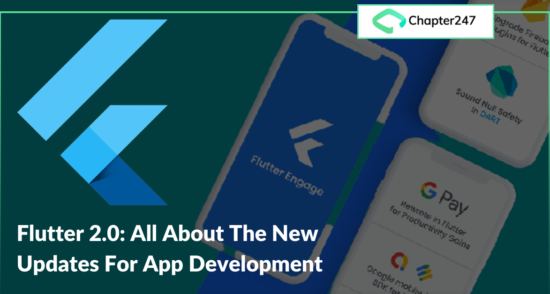 Flutter 2.0: All about the new Updates for App Development

Flutter 2.0: All about the new Updates for App Development