Learn how these top companies created their mobile apps on React Native.

JavaScript is considered as one of the most popular programming languages. It has several competent frameworks in its books each offering diverse functionalities and modules. While many frameworks haven’t made it, of the remaining, many have shown promise. One such framework is React Native.

React Native is considered one of the strongest frameworks to be churned out of the JavaScript library.

What is React Native?

In the world of thrilling mobile apps, developers stand by React Native and its ability to support both iOS and Android platforms. With single coding, React Native app development can be made available on both platforms. It is a popular framework that is backed by Facebook and has humongous community support.

React Native is a framework that constructs a hierarchy of UI components for building the JS code. To build native mobile applications, it has a unique set of components for both the platforms.

The React Native development journey has been thrilling. It was initialized by Facebook with its Hackathon project in 2013. Since then it has become one of the most adopted frameworks for mobile apps. It also was announced in 2015 that React Native will be made available on Github.

1. Code it once and use it everywhere – one of the top reasons to prefer React Native is because its codes can be used in cross platforms.

3. Focus on UI design – it is focused on UI design making it responsive. Its rendering abilities also are by far the best.

4. The strongest community in terms of cross-platform app development – as we have seen, the community is increasing and with Facebook’s interventions, it is bound to touch greater lengths.

6. Immense support for third party libraries – this is surely a great supporting feature giving the developers a choice.

9. Live reload – this feature provides a two-way feature or two screens, one to modify the code and the other to see the modification.

With the increasing popularity of React Native, there are several mobile applications that have been sturdily built on React Native development. Let us explore them:

1. Facebook ads manager – this is the first holistic React Native cross-platform built by Facebook. The interface is neat, UX is intuitive and the navigation breezy, which guarantees a seamless experience for the users.

2. Instagram – the Instagram app has an easy user interface which means that adopting a new technology platform was easier for them. But with React Native, the app became easy to maintain on both the platforms.

3. Bloomberg – a finance app that provides global news. Before React Native app development, the company had wasted a lot of time in first developing and then updating the versions of iOS and Android app.

4.  Airbnb – This is yet another popular app built on React native development. The development team of Airbnb also prefers it because of its reusable code system architecture which makes it easy to refactor.

5. Gyroscope – Another revolutionary app is Gyroscope which has a health kit enabling its users to track their steps, heart rate and also display a spectrum of activities like meditation, weight loss and much more. With React native development, the interface has become a cakewalk!

8. Discord – 98% of the code is shared between iOS and Android apps which is a great way to show how React Native development is wonderful for cross-platform app development.

9. Discovery VR – a platform that brings adventure on an app through Virtual reality or 360 videos. The UI of the app is coded in React Native which offers a seamless VR experience to its users.

10. Townske – another singular platform that acts as a link between local travel guides and avid travelers. The company had already been using React Js for its front-end and wanted to continue its usage owing to some good experience it recorded. React Native mobile app development was a conscious decision.

React Native development has some big names attached to it which is why an increasing number of people are associating themselves with it. It has gained popularity and has bright future prospects compared to several frameworks that are currently available. 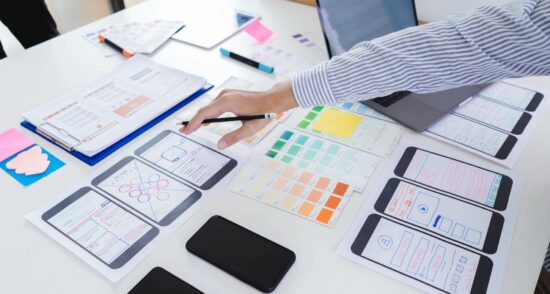