Explore the most sought-after Android Development Frameworks & Tools that make Android development all the more productive.

Mobile devices are commonplace these days and mobile apps are preferred by users to obtain any product or service they need. The two most popular operating systems are Android and iOS, Android being the more popular one. “Android is the choice of more than 2.8 billion active smartphone users across the globe with a market share of 75%” as reported by the online marketplace BusinessofApps.

Needless to say, android app development is a lucrative investment option that multiple business owners are eying. This post explores the most popular Android development tools and frameworks. A quick read will prove beneficial for the app creators who are planning to build an Android app.

Facebook-developed React Native is one of the most popular open-source Android development frameworks available for mobile app development. Besides Android, this framework is also used for building apps for iOS, Web, and UWP. It uses JavaScript and leverages the goodies of the React SDK.

Unlike other mobile app development frameworks that simulate native performance, React Native employs the native building blocks available in its ecosystem. As such, developers are able to create apps that render like native applications. The “hot reloading” feature allows React Native developers to update files or apply immediate changes without having to disrupt the app’s present state or recompile the app. On account of the “Code Send” function, app users need not authorize or restart their app, when app updates are rolled out. The availability of in-built components and access to native APIs enables developers to create visually appealing Android apps that perform very well.

Another USP is React Native’s ability to effortlessly integrate third-party libraries & plugins into an app’s codebase. This saves developers’ time and effort wasted in rework. RN’s high code reusability across various platforms and operating systems reduces the development time and costs. Its declarative programming technique allows one to easily detect any error. React Native also boasts of a strong and ever-growing community that addresses developers’ queries and concerns.

With Xamarin.Forms, one can develop native applications with a shared user interface code that is written in XAML or C#. Hence, developers use a single language to write the entire business logic and at the same time build cross-platform apps that look, feel, & perform like native apps. Moreover, due to Visual Studio integration, 75% of its codebase can be shared when you create cross-platform apps with C#.

Xamarin offers platform-specific libraries that enable developers to access APIs from platforms like Google, Apple, and Facebook. This way, they’re able to enrich the abilities of the application. A huge template library is also available which facilitates code reusability and manual customization of certain app elements.

Xamarin comes with a developer-friendly environment. There’s an abstraction layer for managing the communication taking place between the shared code & the fundamental platform code. Thanks to the testing services of Microsoft Cloud, Xamarin apps can be tested on a wide range of devices.

The user interface of an app built in Cordova technically works like a WebView and runs the JavaScript/HTML code in a native container. This way, the app can access the native device features. Cordova offers several plugins that connect the JavaScript code to the native code at the back-end. While cross-platform app development, the developer writes the code and then converts the SDK files to various platform formats.

This Google-created SDK, written in the Dart programming language, eases cross-platform development and is one of the best options to consider for building hybrid apps.

Flutter is a newbie and does not have a stable version yet.

Ionic is another sound Android development framework that is open-source and free. It is licensed under MIT and is compatible with most front-end frameworks like Vue, React, etc. Ionic employs JavaScript, CSS3, and HTML5 as the fundamental building blocks and allows you to develop amazing hybrid apps.

Ionic comes with cross-platform compatibility, Cordova Plugins, AngularJS base, and a plethora of software tools, animations, and gestures. Ionic app developers create apps that have a sophisticated & aesthetic design and are visually appealing. You can customize the look & feel of your Ionic app by employing the different kinds of in-built themes and components.

Corona SDK is one of the speediest Android development frameworks available. This SDK is free, cross-platform, and available for other platforms like desktop, TV, and mobile OSs.

This Android development framework is created on HTML5, one of the fundamental tools for deploying mobile apps. It supports multiple browsers including the latest Android browsers and Internet Explorer6.

The framework is easy to comprehend and use. Therefore, very less coding is required for writing its setup interface. jQuery facilitates various event handling tasks and offers CSS animations & Ajax. Developers can change the app’s look and feel as per the project’s needs using its in-built theme system. jQuery developers can handle user input functions like mouse, touch, and pointer with the help of simple APIs.

jQuery also provides numerous form components that can be customized by developers to optimize them for touchscreens. This framework has the ability to make web pages more accessible to users with disabilities who employ assistive technology like screen readers. This function is achieved by using ARIA (Accessible Rich Internet Applications) that is built into the framework.

This framework is open-source and offers an API builder with Hyperloop to all its free users. Appcelerator Titanium follows a mobile-first approach and leads to the creation of clean and visually attractive native-like applications that perform well. Android apps developed in Appcelerator Titanium can leverage the hardware-centric functionalities like menu buttons, platform-based notifications, OS-specific controls, etc.

This Android development tool is simple to use with a drag-and-drop interface. Android Studio offers components that assist developers in debugging apps, editing codes, and testing. This tool enjoys the support of Google and a huge Android developer community.

With Android Debug Bridge, Android devices can communicate with other computers that are employed during QA testing. Android developers establish a connection between an Android device and a computer for making modifications to both devices.

AVD Manager is an emulator that runs an Android app on the computer to provide a vision of how the code looks like actually. This helps developers to identify the glitches and find out whether the code requires any adjustments.

This tool comes at an affordable price. It is basically an emulator solution using which one can “mirror” an Android device to a computer such that it can be controlled from the keyboard. You can also use Vysor to screencast from your device during demos & meetings.

I hope you are now well versed in the unique offerings of the aforementioned Android development tools and frameworks. These frameworks and tools undoubtedly boost the effectiveness and productivity of Android app development.

However, to reap the full benefits of these tools & technologies, app development teams must follow the best practices and adopt the right strategies. So, if you are a beginner or a non-technical app creator, I would recommend you seek assistance from an experienced android app development company that offers end-to-end development services. 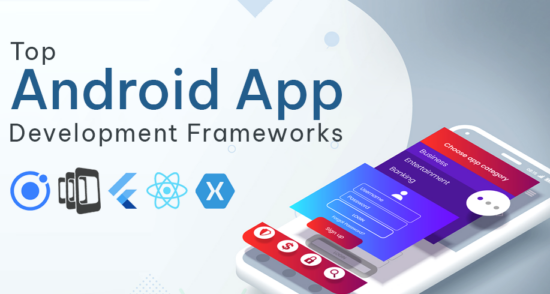